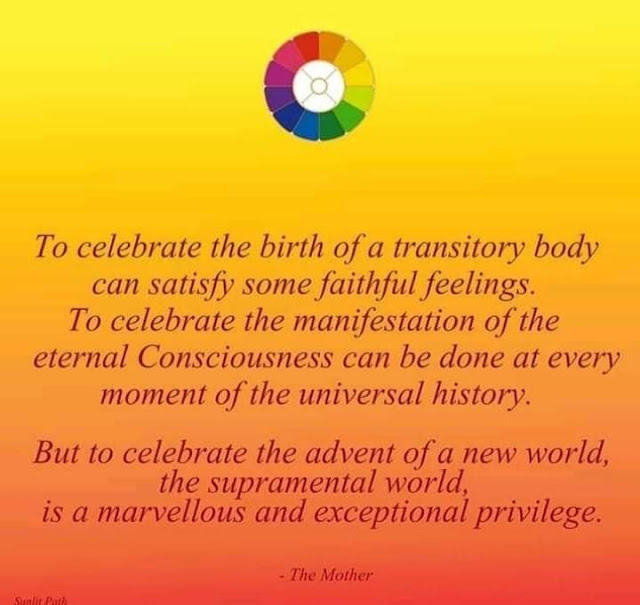 Meditation on Wednesday, the 29th February 1956. She gave us a passage from her own diary of experiences and realisations:
"This evening the Divine Presence, concrete and material, was there present amongst you. I had a form of living gold, bigger than the universe and I was facing a huge and massive golden door which separated the world from the Divine. As I looked at the door, I knew and willed, in a single movement of consciousness, that "the time has come", and lifting with both hands a mighty golden hammer I struck one blow, one single blow on the door and the door was shattered to pieces.
"Then the supramental Light and Force and Consciousness rushed down upon earth in an uninterrupted flow."
This reminds us of the 15th mantra of the Isha Upanishad as translated by Sri Aurobindo:
"The Face of Truth is covered with a brilliant golden lid; that do thou remove, O Fosterer, for the law of the Truth, for sight."
Sri Aurobindo goes on to explain the significance of the word "Fosterer": "In the inner sense of the Veda Surya, the Sun-God, represents the divine Illumination of the Kavi which exceeds mind and forms the pure self-luminous Truth of things.....
"He is the Fosterer or Increaser, for he enlarges and opens man's dark and limited being into a luminous and infinite Consciousness....His rays are the thoughts that proceed luminously from the Truth, the Vast, but become deflected and disordered in the reflecting and dividing principle, Mind. They form there the golden lid which covers the face of the Truth..."
In his New Gayatri mantra, Sri Aurobindo enthrones the Mother as the Devata of the mantra, whereas the original Gayatri mantra had placed the Lord or the Fosterer in the form of the Sun. 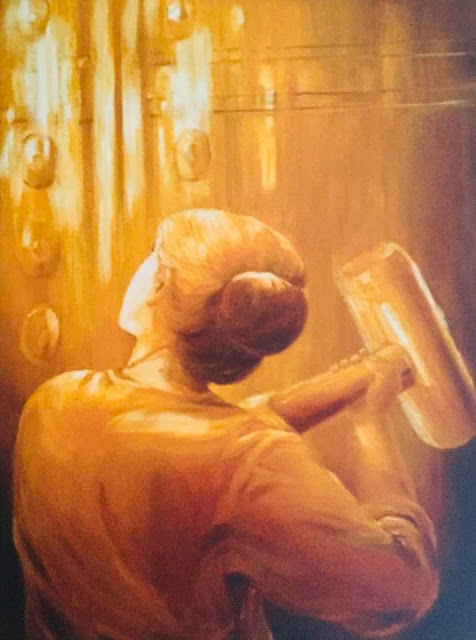 29 FEBRUARY THE DAY OF THE LORD
Amal Kiran Remembers...
Now again in 1956 I had to go to Bombay at the end of February. As 1956 was a leap year, it was actually on February 29 that I left Pondicherry. I was to catch the morning train to Madras. So I met the Mother pretty early in the day. She said: "I don't want you to stay away long. Can you come back by the 29th of March?" Evidently she was expecting "great things" once more - the Supramental Manifestation, though she did not specify anything - and she was expecting it within a month's time, perhaps on the 29th of March itself, the date on which, 42 years earlier, she had first come to Pondicherry. I replied, "Mother, I shall surely be back by then." Then I left.
That very day, in the evening, the stupendous thing happened! If I had known, I would never have gone. But I had a strange experience the same night. I need not recount it in detail, for I have told it elsewhere. At Madras I had caught the night-train to Bombay. I was alone in my compartment and I soon fell asleep. Almost at once I had a dream. I saw a huge crowd in an open place - something like the Ashram Playground - and I was on the fringe of the crowd. The Mother was sitting somewhere inside the open place and everybody was going in to do Pranam to her. I also wanted to do it, but somehow I couldn't get the slipper off my left foot - the lame one as you know. I was shaking the foot and trying to fling away the blessed slipper. In the final jerk of that action I woke up. when my eyes opened, I saw the Mother standing in front of me in the compartment. I am a very sceptical fellow as a rule; so I thought I was imagining things. I shut my eyes; I opened them again, and there she still was. I shut my eyes once more and opened them. She was yet standing. This was too much. So I shut my eyes now for a long time. When I opened them, she was gone. Perhaps I should have kept looking and not allowed the sceptic in me to have play. I might have had a deeper experience. But the benefit now was that the sceptic got completely routed. And indelible wonder filled me. And the memory of that strange calm translucent figure has stayed for ever with me.
I wrote of the experience to the Mother, but received no reply.. Only on my return to the Ashram she explained what had occurred. It sounds too self-glorifying to talk of it, but it was a very glorious thing to hear from her. She said: "There were only five people who knew about the Supramental Manifestation - two in the Ashram and three outside." I blurted out: "Then what's the idea of staying in the Ashram?" (laugher) She said: "I don't mean that anybody actually knew the Supermind had manifested, but something extraordinary happened to some people. Among those three who were outside, I count you." Puzzled, I asked: "How's that?" She answered: "Didn't you write to me that on February 29 at night you had seen me in the railway compartment?" I said: "Yes, but what did happen?" She replied: "Do you remember I promised in 1938 to inform you ? I came now to fulfil my promise." I was absolutely overwhelmed. My God! what Grace the Divine could give to a poor fool! I fell at the Mother's feet in deepest gratitude.
Light and Laughter Pg. 89
Amalkiran


"In the ignorance and darkness of the beginning, faith is the most direct expression of the Divine Power which comes to fight and conquer. " 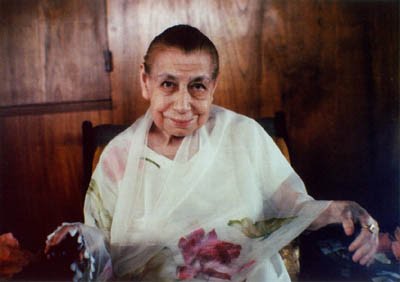 “Faith is the movement of the soul whose knowledge is spontaneous and direct.

Even if the whole world denies and brings forward a thousand proofs to the contrary, still it knows by an inner knowledge, a direct perception that can stand against everything, a perception by identity.

The knowledge of the psychic is something which is concrete and tangible, a solid mass. You can also bring it into your mental, your vital and your physical; and then you have an integral faith - a faith which can really move mountains.” 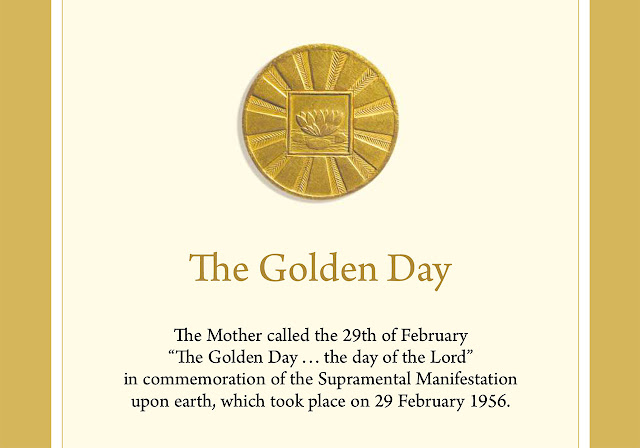 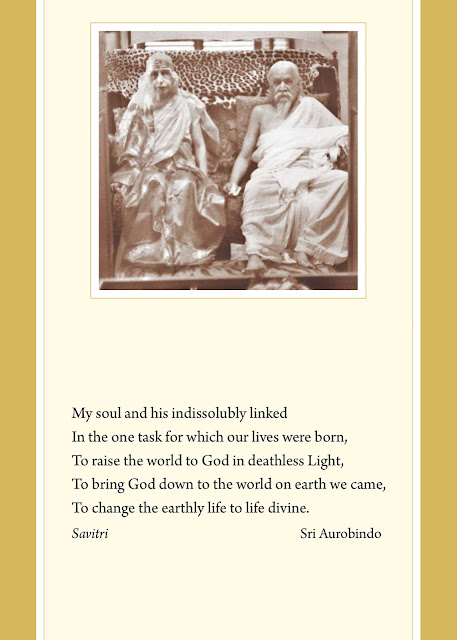 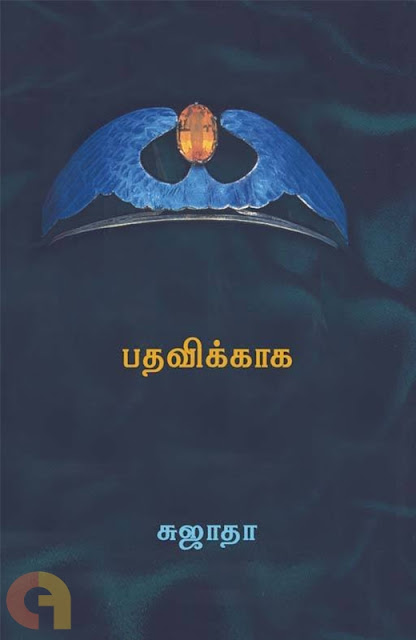 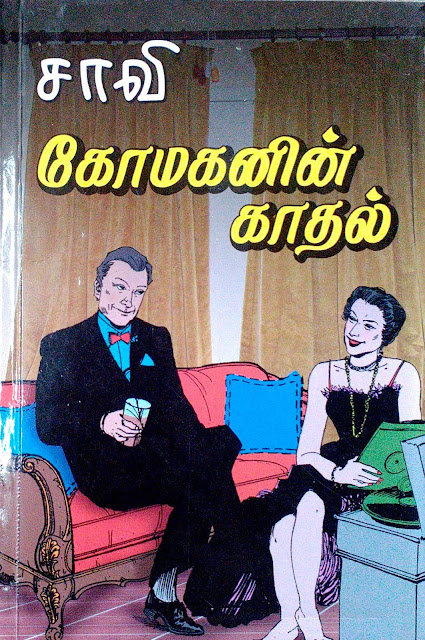 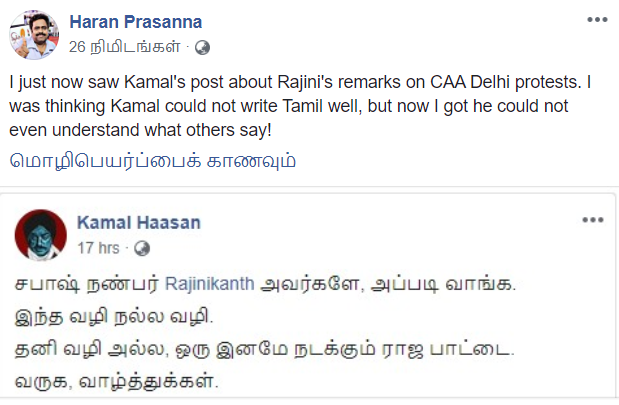 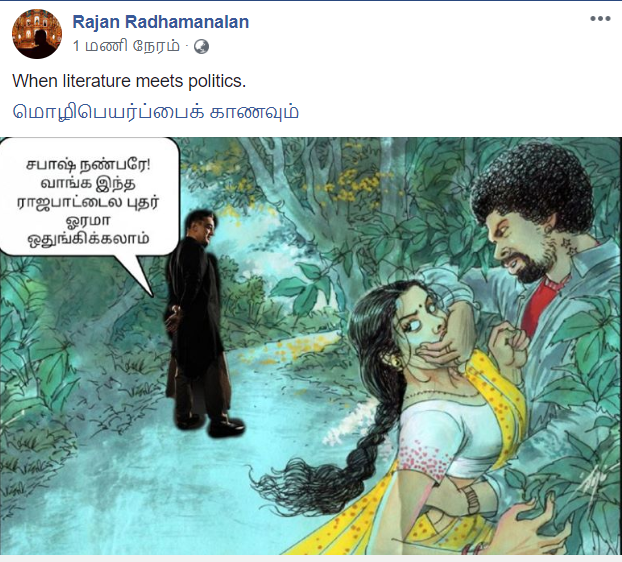 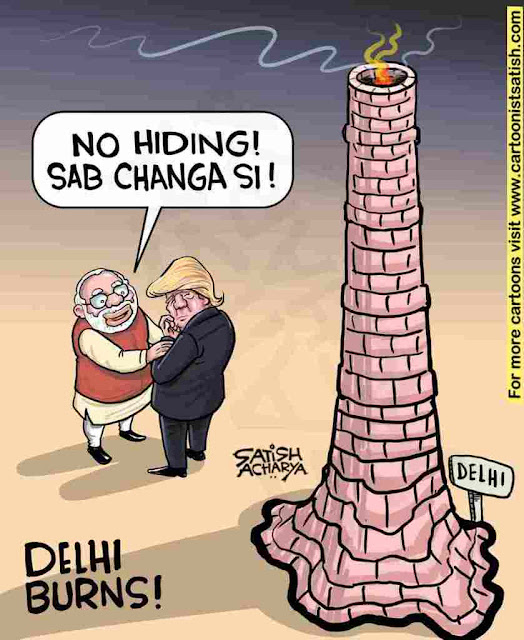 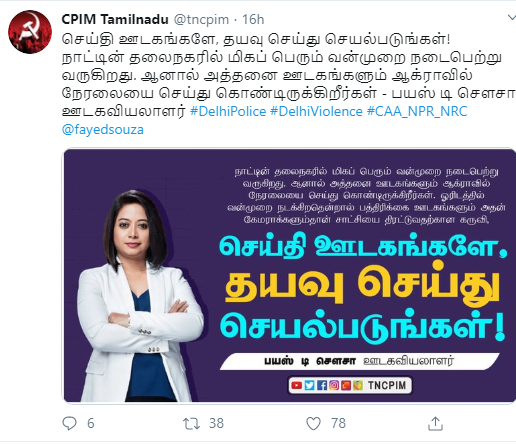 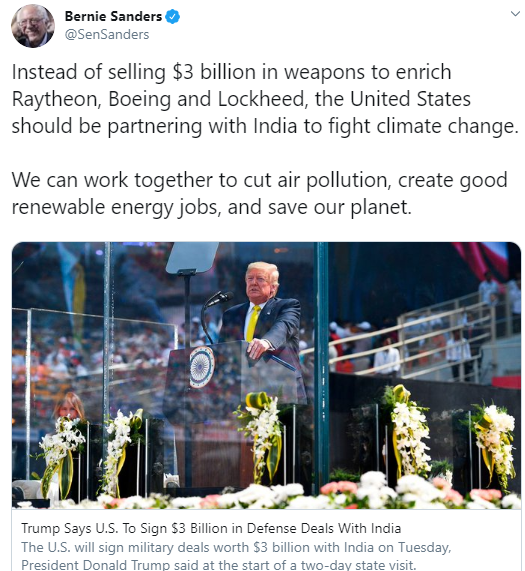 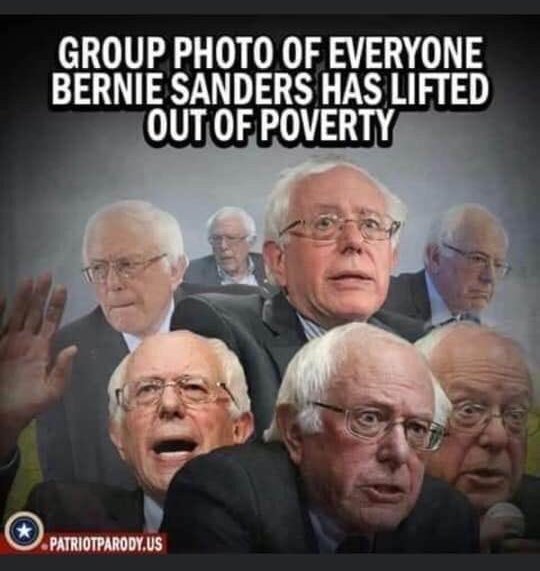 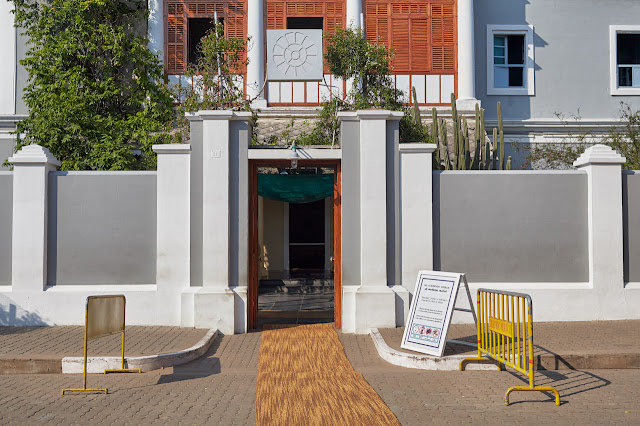 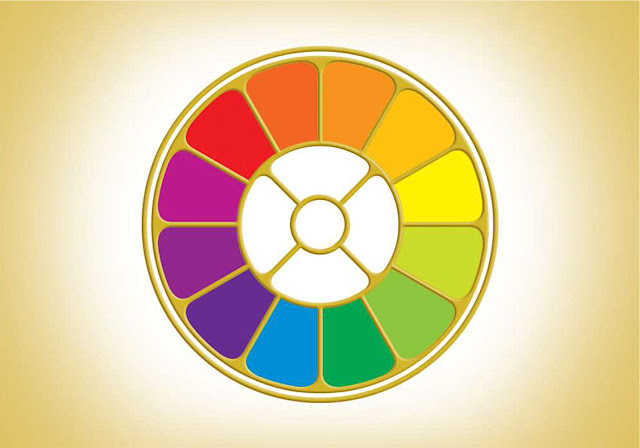 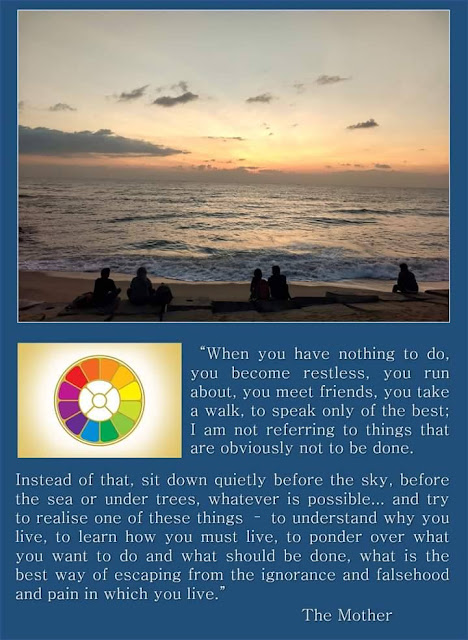 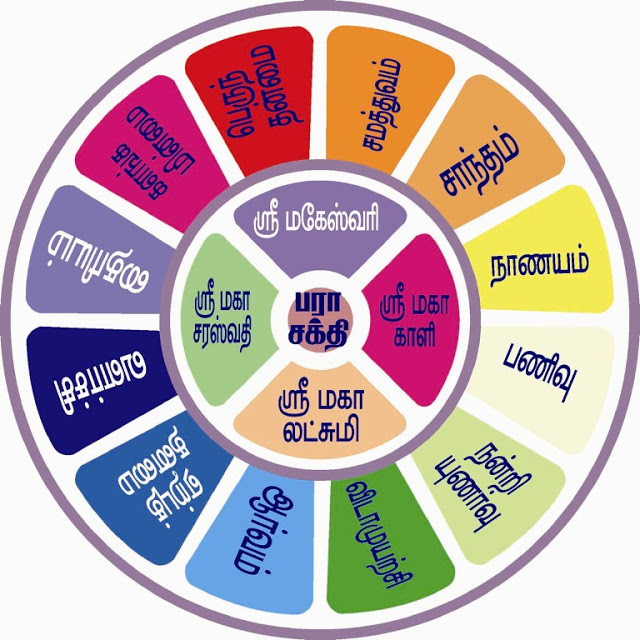 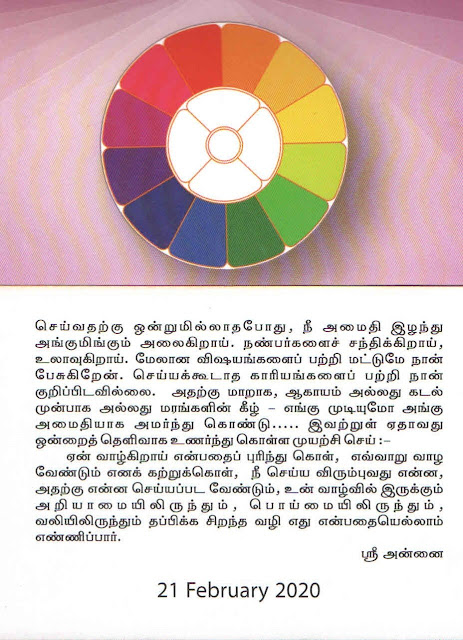 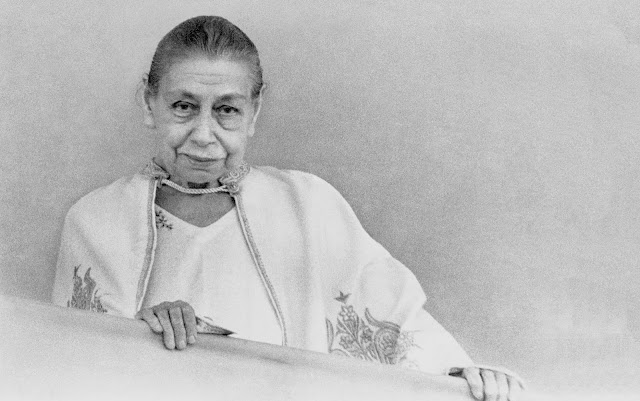 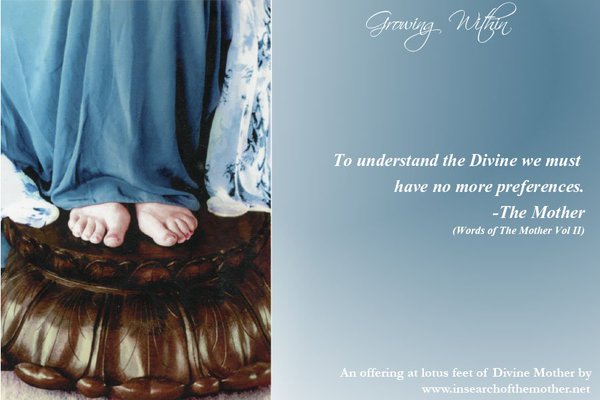 The point in this and similar stories is that as long as man depends upon his own strength—which is in fact so puny—or on that of other human sources, the Divine does not enter into the picture. Man is allowed to struggle and realise the limitations of human effort. The inner soul-strength comes to the fore when the external being, in its moment of truth, realises its utter failure to meet the challenges that face it and appeal to the Divine, whether within or above. In a slightly different context, Sri Aurobindo puts it graphically in SAVITRI how in moments of crisis man is forced to look to the Divine:


An hour comes when fail all Nature's means,

Forced out from the protecting Ignorance

And flung back on his naked primal need,

He at length must cast from his surface soul...


When our strength fails, when our human resources fail, when we sincerely call for the Divine's help, the Divine never fails. Only we must have the eye to perceive the Hand of God which may be cloaked in appearance that may be misleading at first sight. The help may not come in the form in which we expect. It may even come in the form of happenings that go counter to our expectations. The ways of the Divine Saviour are mysterious, as complex as the causes of our difficulties. The most unlikely elements play a helpful role. At times even enemies are moved to fraternise with us. We are baffled. We try to find explanations and at times attribute ulterior motives to the benefactors. But the fact remains that individuals are moved to act helpfully, circumstances are shaped favourably—all because the Divine has willed to save. 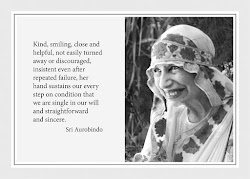 ஸ்ரீ அரவிந்தர் அருளிய சாவித்திரி மகாகாவியத்தில் இருந்து ....
“Consent to be nothing and none, dissolve Time's work,
Cast off thy mind, step back from form and name.
Annul thyself that only God may be."
SavitriBook 7 Canto 6